We took a 7:00am flight to Belfast via Easy Jet and landed in Northern Ireland shortly after 8am. A friendly cab driver drove us to our hotel, and upon learning that it’s our first time in Belfast, gave us our first taste of Irish hospitality. He was very friendly and pointed key tourist attractions to us. He also shared a bit of history. We didn’t know anything about Northern Ireland prior to our trip. In fact, I only found out that Northern Ireland is part of the UK when I did my research prior to our trip. The main attractions that made this a part of our itinerary are the Giant’s Causeway and Carrick-A-Rede Rope Bridge. Apart from that, we knew nothing. So it was both a surprise and shock to learn about the religious segregation and the conflict between the protestants and catholics. I’ve read about it before but I thought it was in Dublin, not Belfast. Anyway, our cab driver assured us that we are completely safe in Belfast, and that there has not been any violence in about a decade. He did share that in the past, he would check his cab for a bomb every morning before going out into the streets. Ariel and I looked at each other with wide-eyed fear. Yay! Maybe, it was for the best that we didn’t know about it before we booked. Otherwise, we would have skipped this leg of our trip and miss seeing the beautiful Irish state.

We checked in at the Park Inn Belfast Hotel which is much more affordable compared to the hotels of the same caliber in both Scotland and England. I booked through Booking.com.

Our room had a modern design in bold primary colors. The queen-sized bed was comfortable. There was no bath tub but the shower enclosure was spacious. It was more than what I expected for the price.   We just stayed long enough to unpack before heading out for our tour.

I had been searching for tours in Belfast but couldn’t find anything other than private car tours which cost a lot. I found two private tours that cost £250.00 and I was going to settle with it. Fortunately, just a day before we left for Belfast, I found Allen’s Tour Company. We were able to book a city tour at only £9.00 each, and an Antrim Coast Tour for only £16.00. I paid a total of £50.00 via their online booking, and saved £200.00!!!

We took a cab to the pick up point for the tour at the Castle Place which turned out to be just a few blocks away from our hotel and is in the middle of a busy commercial area. Just like the Hop On Hop Off buses in London, our tour bus is a double decker. For a better view, we decided to sit at the 2nd level which was half enclosed, and half open air. At first, we opted for the open air seating, wondering why no one else wanted to sit there. Soon, we found out why. It was so cold! We quickly transfered to the enclosed area. Even then, Ariel and I got our gloves and scarves out aside from our fleece-lined rain jackets. It was colder than in Scotland. Brrr…

Our tour was soon under way. We learned more about Belfast’s history, revolving around the religious conflict. We were not able to take photos because we did not hop off the bus, and chose instead to take shelter from the cold and listen to the commentary. Also, we got a bit scared. Part of the highlight of the tour are the many murals around Belfast, a “peaceful” way for locals to express themselves and their political and religious views. However, some murals depict men with firearms. Errr…who wouldn’t get scared?

We also saw the “Peace Wall”or “Peace Lines”. I was actually initially puzzled by this since the wall is the literal line that divides the Catholic and Protestant neighborhoods. Isn’t divisiveness the opposite of peace? But then our guide explained that as long as one keeps to his side of the wall, conflict and violence will be avoided. The wall itself is not remarkable – just an ordinary structure, with a few murals in some areas, but it stands to be a significant symbol of Belfast’s history. Our guide did mention that there has been no violence in the past 10 years so they are hopeful that peace will prevail in the years to come, and someday, the wall that divides Northern Ireland will fall, just like Berlin Wall. So anyway, since I didn’t take photos, here are some links to photos and information on the Peace Wall and Murals around Belfast. Click here and here.

One other reason we were a bit apprehensive to get off the bus is that the interval of the buses is a bit longer than those in London – mainly because of the volume of tourists in London and the abundance of tour buses. If I remember it right, the buses pass by every 45 minutes. That’s a long time to wait on the deserted streets of Belfast! Speaking of deserted streets, that’s one other reason why we were wary. There were hardly any people on the streets!

So anyway, it was already lunch time by the time we got off our tour bus. And guess what? Right in front of the bus stop was a Pandora Jewelry Store! Ok, I never planned to go shopping in the UK but this was on my very short list of things to buy. Ariel promised to give me a Pandora bracelet for our anniv. Problem is that we have never been able to catch an open store in both London and Edinburgh. So, here’s the perfect opportunity! Happy camper!

Our city tour guide mentioned Campbell’s Cafe as one of the oldest cafes in Belfast so we gave it a try.

Boy, it looked and smelled old. Even the server was old – LOL! We had a light sandwich and coffee. Not our best meal, but certainly one of our cheapest. We only paid £1.00 each for our sandwich, plus another £1.00 for our drinks. I guess for the price, we really can’t expect much. Here are a few more photos of the cafe.

After watching the street entertainment for a few minutes, we both badly needed to go to the toilet. Campbell’s was too old and the toilet was out of order (that was a first!) so we had to wait after lunch to find a public toilet. We were pointed to a small structure but we didn’t see any toilet. We circled the block and realized that the rectangular structure we saw was THE toilet.

We stared at it for a bit – thankfully, no one was in line – because we couldn’t figure out how it works. There was no knob or button on the stainless steel door. Then I noticed a panel on the left side. It turned out, we had to drop £0.20 to use the toilet.

Once I dropped the coin, the door slid open. Our eyes widened with amazement that only someone from a 3rd world country would understand. High tech! The toilet bowl was also made of stainless steel. It flushes automatically.

On the left side of the bowl was a control panel. There was a button to access the toilet paper. Then you just insert your hand in a hollow space and liquid soap automatically drops followed by a gush of water to wash your hands with. Move your hands to the right and warm air comes out to dry your hands. I was blown away. Promdi! Hehe.

I took photos of course. I also noticed that there is a timer. Maximum time one can spend inside is 15 minutes. Once the time is up, the door automatically opens.

Once I was done, I opened the door and got out. Before Ariel can get in, it closes on its own and started the self-cleaning process. Impressive!

After our toilet break, we decided to walk some and explore the city on foot. We remembered the Albert Clock and the Salmon statue during our bus tour and decided to go there for photos.

The Albert Clock was built in 1869 and was a memorial for Queen Victoria’s husband, Prince Albert, who died in 1861. The monument was built on reclaimed marshy land and soil erosion has caused it to lean (like the Tower of Pisa) by over 4 feet off the perpendicular.  The monument houses a two-tonne bell, and looks very similar to the Big Ben in London.

A stone’s throw away from the Albert Clock was this gigantic salmon sculpture known as The Big Fish.

This 10-meter installation  by the Lagan River was built in 1999 to celebrate the regeneration of the River Lagan. The river had been so polluted that fish had died. The local government (I assume) worked to revive the river and they succeeded. The statue symbolizes the return of the fish to the river. Its surface is made of blue ceramic mosaic decorated with texts and messages about the history of Belfast. It’s quite a piece of art! 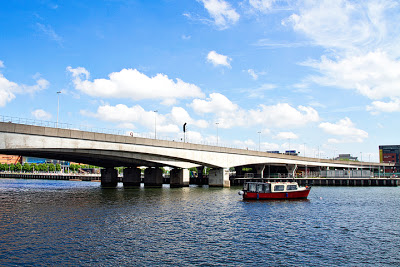 While taking photos by the river banks, we saw a Titanic Boat Tours by The Lagan Boat Company. Perfect timing, too, because the tour starts at 2pm and it was 1:30pm. We got our tickets for £10.00 each.

Aside from the two of us, there were just 4 other passengers on the boat. Like I said earlier, the city felt deserted. One of the key landmarks we saw is the Titanic Quarter (see Wikipedia entry), a residential and commercial development project in conjunction with the river regeneration. I really need to brush up on my history because I had no idea that the Titanic was built and launched from Northern Ireland (and this is why I believe traveling is the best way to learn and appreciate history). Anyway, at the heart of the Titanic Quarter will soon rise the Titanic Belfast, a new visitor center designed to showcase Belfast’s history including the story behind the famed ship. It is set to open in 2012.

The Titanic Belfast is said to resemble the hulls of four ships, but to me, it is shaped like an iceberg specially with the reflective glass surface. 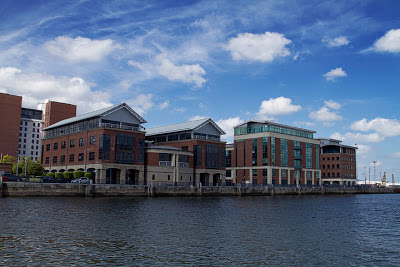 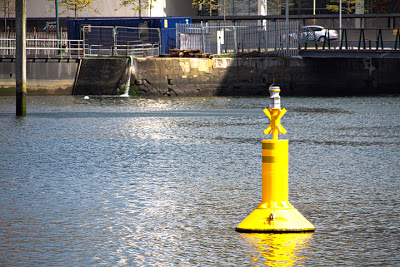 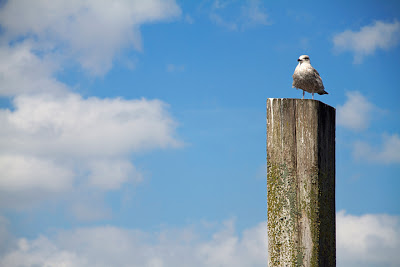 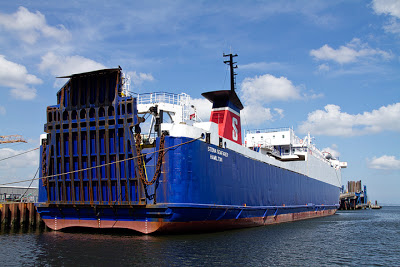 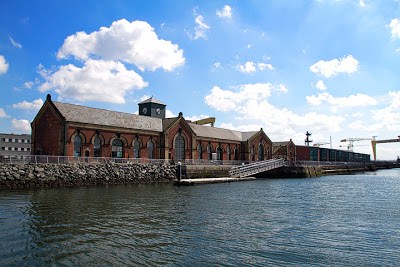 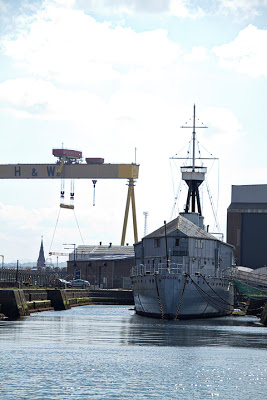 After a while, Ariel couldn’t stand the cold any longer and went down inside the boat. I stayed outside for as long as I can to take photos but soon joined him inside. The other passengers also started pouring in. If them Europeans were feeling the cold, how much more for us tropical country dwellers? 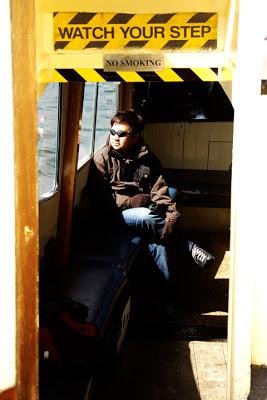 Another popular landmarks are the Samson and Goliath Cranes which dominate the skyline of Belfast. Goliath at 315 ft. was constructed in 1969 and Samson at 348 ft. in 1974 by one of the biggest shipbuilders of that time, Harland and Wolff. 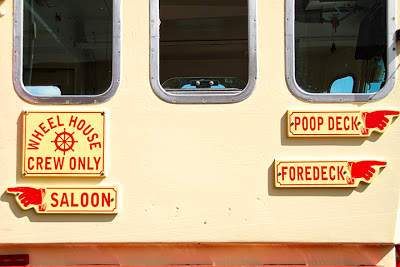 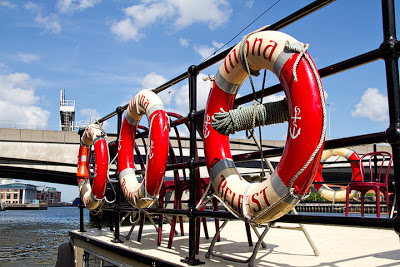 At £400Mn, Victoria Square is the biggest and one of the most expensive property developments ever undertaken in Northern Ireland. Well, they should visit the malls in the Philippines because Victoria Square can easily fit inside one of our smaller shopping malls. BUT it sure is pretty! The architecture is quite fancy. However, by the time we got there around 5:30, most shops were already closing! 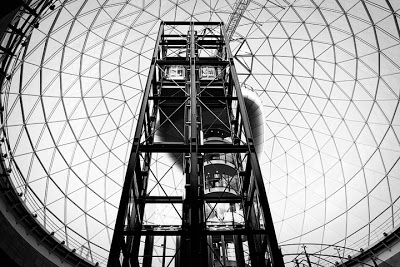 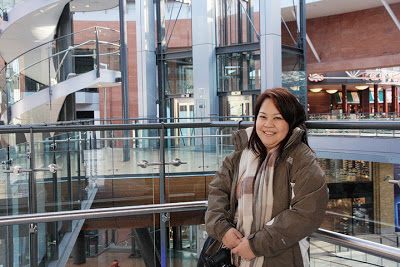 Since we couldn’t do any shopping anyway, we decided to just grab an early dinner. We chose to eat at Chiquito, a Mexican restaurant. There was a branch near my brother-in-law’s place and we’ve been wanting to try it but just couldn’t find the time, so we thought we’d try it then.

After dinner, it was time to walk back to our hotel. All the shops were already closed, and there were hardly any people on the streets. 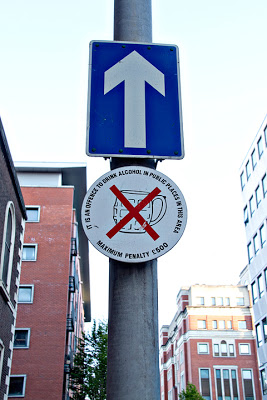 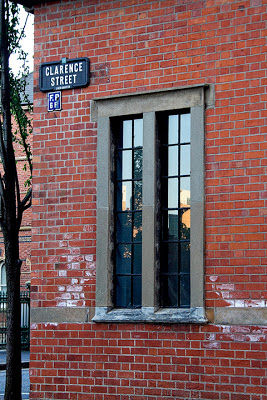 We just rested for the night and prepared for the full day tour the next day.  That’s it! Thanks for viewing! Part 2 of our Belfast Tour coming soon.

Discovering the UK – Day 6: First Day of our Isle of Skye Tour