As with the first B&B we stayed in, breakfast was served at 8am. Again, fortunately, we were last to be picked up at 8:45am. While we were first to be dropped off, our B&B happened to be at the edge of the town so it was the last pick up point before proceeding to the day’s tour destinations. Breakfast was traditional Scottish buffet, same as what Ariel had in Saucy Mary’s. We had potato scones, beans, sausage (which really doesn’t taste much), lean bacon, toast, fruit juice and coffee. We made sure we had a heavy breakfast as we didn’t know if and when we will be having lunch.

On the way to our yet unknown destination, our driver-guide saw a pier by the roadside and decided to take a detour. We got off our mini-coach to take a few photos.

After a few shots, we had to hurriedly leave as the place turned out to be a private pier and we weren’t supposed to be there. LOL!

Our next stop was the Inverness Castle which now houses the Sheriff Court. It’s not open to the public but we were free to roam around the grounds and take photos. In front of the castle is a statue of Flora MacDonald, a local heroine.

The castle has a magnificent view of the River Ness, which is connected to the famous Loch Ness. The first sighting of the Loch Ness monster was said to be in this river.

Our next stop was at the Culloden Battlefield Memorial. This is the location of the historic Culloden Battle. I didn’t exactly like history as a subject when I was still a student (the reason why is a story deserving a separate post). I realize traveling is the best and most fun way to learn and appreciate history.

We went inside the museum to learn more about this battle. The exhibit was very cool, with a mix of audio, visual and interactive displays. My favorite section was the 360 degree movie of the battle. We were standing at the center of the room and it felt like we were in the middle of the war. It was both exhilarating and terrifying. If you watched Braveheart, it felt like we were right there, caught in the middle, seeing the blood and gore up close. 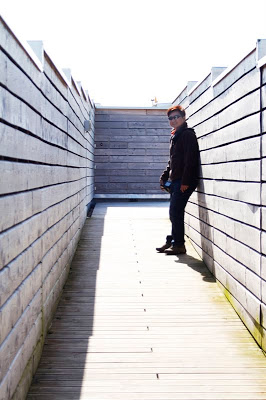 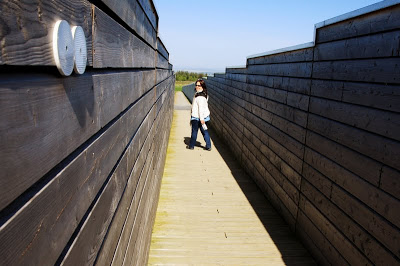 We stopped for late lunch at the quaint town of Pitlochry. The place was swamped with tourists this time of the year when the weather has started to warm up (by Scottish standards!).

We had just enough time to grab lunch, and a few souvenir items. We chose a small pub where I ordered Fish and Chips (what else?!) and Ariel opted for Scottish Beef Stew. The latter was a sweet beef dish served in a ramekin, covered with puff pastry. Ariel wasn’t so crazy about it because of the sweet notes.

After our lunch break, our next stop was at the National Wallace Monument in Stirling, Scotland. Our guide warned us that it was an uphill trek to the monument, plus a steep climb to the exhibits. We only had 30 minutes to see the monument so many of our tour-mates decided just to check out the souvenir shop at the base of the hill. Ariel and I must not have been thinking straight because we decided to actually go up to the monument.

It was an exhausting climb up a sandy-rocky trail. We were practically jogging and I had to stop every few minutes to catch my breath. After about 10 minutes, we reached the monument.

Inside the monument, it was a steep climb up the winding stone stairs before we can even see the first exhibit. The first level contained William Wallace’s sword and there was an audio playback of his trial. We didn’t have time to listen as we were really running out of time. The second level featured the Hall of Heroes where small busts of Scotland’s heroes were featured along with their contribution to this great nation (sorry, no time for photos).

I decided to start my descent after seeing the Hall of Heroes. I didn’t think I’ll have the energy to climb up two more levels to see the top of the tower so I started running down to wait for Ariel at the base of the monument. Ariel, on the other hand, ran up to get a glimpse of the top. The top of the tower was an open dome that gives one a spectacular view of Stirling. Ariel took a few photos before going down. 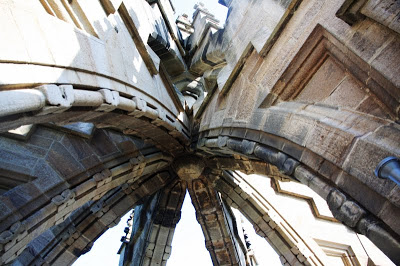 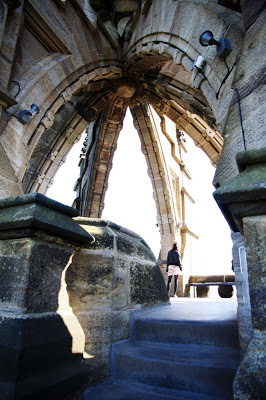 Ariel met me at the tower entrance and together, we ran down along the rough trail and back to our mini-coach. We got there with just minutes to spare before our scheduled departure back to Edinburgh. We were both sweating profusely even with the cold weather. And this was the day I chose to wear thermals!

We also made a quick stop at the Forth Bridge before heading back to Edinburgh. Locals dub it as an ugly bridge but I found it beautiful. Imagine, this was opened in 1890, back when we didn’t even have concrete roads in the Philippines (well maybe a few).

Also called the Forth Rail Bridge, the 2.5 km. (1.5 mile) bridge is the world’s first major steel bridge, with its gigantic girder spans of 521 m. (1710 ft.) ranks as one of the great feats of civilization. It was begun in 1883 and formally completed on 4 March 1890 when HRH Edward Prince of Wales tapped into place a ‘golden’ rivet. (Source: Forth Rail Bridge)

From where we were standing, we could also see the much younger Forth Road Bridge, opened in 1964. This bridge also connects the same islands as the Forth Rail Bridge, except that this one is for motorists. 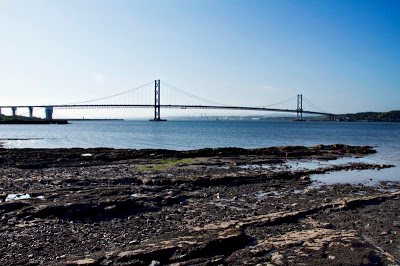 We got back in Edinburgh around 6pm and we checked in at the Apex Waterloo Hotel. It was different from the Apex International Hotel where we stayed on our first day in Edinburgh, but they are both under the same chain. Apex International is closer to the Edinburgh Castle, while Apex Waterloo is in the middle of the shopping district. However, since we got there at around 6pm, the shops were already closed so we didn’t get the chance to go shopping.

Our room was nice, clean, and comfortable. The service was great, too. I went to the business center to print our boarding passes (we checked in online) and we were not charged for the prints.

Ariel and I decided to have dinner at the hotel since most shops were already closed and we didn’t want to go out anymore. I remember it to be one of our priciest meals in the UK, but the food was great.

This marks the end of my Scotland post since we flew back to London early the next morning. Thanks for viewing! 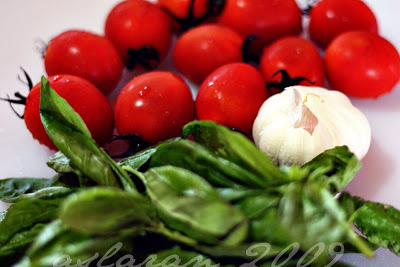 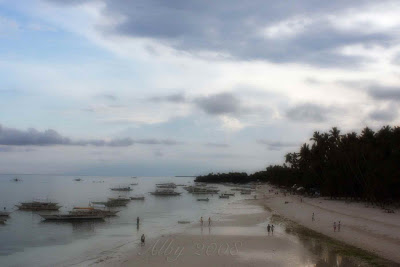 Bohol the 2nd time around