Discovering the UK – Day 6: First Day of our Isle of Skye Tour

I’ve always wanted to see the Scottish Highlands ever since I heard it compared with our own Batanes. So, I made sure that our UK trip included a couple of days in Scotland, and a visit to the Scottish Highlands. I found a 3-day tour to the Isle of Skye and booked us a slot, choosing to stay in a Bed and Breakfast accommodation instead of a hotel.

We checked out of our Edinburgh hotel early and took the cab to the Parliament Square, the pick up point for the tour.

We were met by our guide and driver, Duncan, who ushered us into the mini-coach that would take us on a road trip along the Scottish Highlands. Ariel and I were among the first to board the mini-coach and chose to sit in the last row. It has the most spacious leg room and a space for our hand-carried bags behind our seat. The coach was small enough so the back seat was comfortable, unlike in big buses where the back seat is too bumpy. Our first stop was Loch Lomond. It is the largest lake in Great Britain (source: Wikipedia) and is featured as one of the most beautiful lakes in the world (source: Yahoo Travel).

After Loch Lomond, we made a quick stop in a valley surrounded by mountains still partly covered in snow.

Our next stop was picturesque Fort William, the largest town in the Scottish Highlands.  We were given enough time to grab a quick lunch. Ariel and I opted to eat in a sit down Indian Restaurant so we can have rice.

After lunch, we took a quick detour at the Spean Bridge Mill for a bit of souvenir shopping. Our guide also highlighted the fact that the store sells good whisky. Tempting, but I opted to get a cashmere scarf at half the price instead.

We made another quick stop at the Commando Memorial, one of Scotland’s best-known monuments.

Then we visited the Eilean Donan Castle. The castle is built on a tiny island accessed through a foot bridge. It’s a small privately owned castle originally built in the early 13th century. Photography is not allowed inside so I only have photos of the exterior. 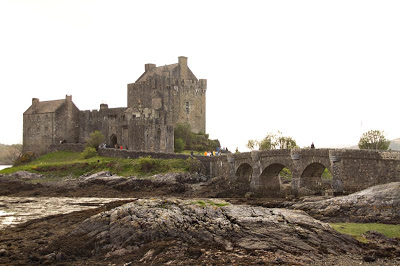 After the castle, we proceeded to the Isle of Skye where we were to spend the night in a Bed and Breakfast. Skye is the largest and most northerly island in the Inner Hebrides of Scotland (source: Wikipedia).

The tour company assigned us our B&B so we only got to know where we were staying on the day of the tour itself. Our driver/guide told us we were booked at Saucy Mary’s. We were among the first to be dropped off. I was a bit nervous because the B&B wasn’t much to look at from the outside. While checking in, there were many other tourists and they were mostly backpackers looking for cheap rooms. Fortunately, we were told by the front desk guy that we were actually booked in the more “luxurious” Glenarroch Bed and Breakfast next door,  owned and operated by the same family as Saucy Mary’s. We were ushered to the main house, up the second floor. Our room was tiny but comfortable. There was a double bed, two small side tables, a small TV, a tiny open closet, coffee and tea making facilities, a small bathroom with shower. The room was unremarkable, but I love the hand-embroidered bed linen.

We had dinner at the Saucy Mary’s Bar. I had fish and chips while Ariel tried their sausage. The food was pretty good. After dinner, we just retired to our room and rested to prepare for the continuation of our road trip the following day. Watch out for it! 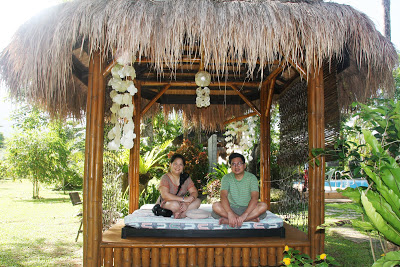 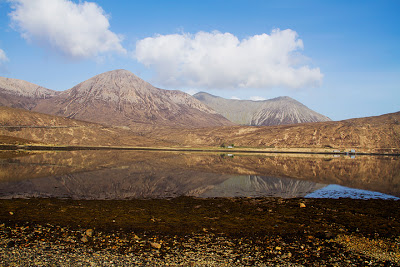