Today marks our first decade as husband and wife. We exchanged vows on a warm Wednesday afternoon, surrounded by people we love. At that time, we thought ten years is a long time, but it didn’t feel long at all. The years breezed by quickly. I guess time really flies when you’re having fun!

So anyway, our years as husband and wife were marked by our annual adventures. I can’t remember how we decided to go on a trip every year on our anniversary. I guess it just happened. After a few years, we decided we will just take time off from work every year to celebrate. It’s summer after all. We also promised that we will keep this tradition even when we already have kids. Here’s how we celebrated our anniv every year:

2001 – The day after our wedding, we drove to Baguio and spent 3 days going around the city. We stayed at Baguio Country Club courtesy of one of Ariel’s colleagues. After we got back, we went to El Nido for a few days. It was one of our most memorable island escapades. We’ve been wanting to go back since, but there’s just too many places to visit around the country.

2002 – For our first anniv, we spent a few days in Boracay. We stayed at Seawind Resort. It was Ariel’s first time in the island so we toured like first timers.

2003 – We went to Bohol and explored Panglao Island for a few days. We stayed at Bohol Beach Club. We went around the usual tourist spots – Chocolate Hills, Loboc River Cruise, etc. This is another place we vowed to return to someday.

2004 – We returned to Boracay again. This time, we stayed at Nami Private Villas. We loved it there. The service was superb. We had a jacuzzi outside our bedroom and the staff really made our stay memorable. On our anniv, we went out to dinner and bought a bottle of wine. We called Nami to fill our jacuzzi with warm water and to borrow a cork screw. When we got back, there was warm water in the tub and it was sprinkled with bath salts. Two wine glasses were prepared by the jacuzzi, along with the cork screw we borrowed.

2005 – This year, we decided to go farther south and booked a couple of days in Camiguin. We stayed at Paras Resort where we fell in love with Bam-I. LOL! Seriously, it was the best tasting Bam-I ever. Later in the year, we went to Boracay with my family

2006 – This is another memorable trip. We went to Batanes and had the grandest time. The highlight of our trip was our adventure at Itbayat. We flew in a 6-seater plane and planned to stay a night. However, we met a couple who invited us to extend our stay so we could trek around the island. We did just that and it was an unforgettable adventure. Our return flight to Basco was canceled so we had to  return by boat – it was a four hour ordeal. We survived to tell the tale! Another place we want to go back to!

2007 – This year’s destination was Cebu. We spent a few days in Bantayan Island which is gorgeous. It was like Boracay minus the crowded beach. After Bantayan, we took a 3.5 hour boat ride to Malapascua. I arranged a surprise dinner for our anniversary by the beach. It was a bit embarrassing because our table was the only one by the beach, lit by candles, and the meal was served on our table (the rest of the guests had buffet dinner). Everyone was looking at us and smiling.  It was a magical night! Both islands are worth a return trip some day.

2008 – Dumaguete was our destination in 2008. We stayed at Antulang Resort in a cottage with a jacuzzi outdoor, overlooking the ocean. The cottage was enclosed in a perimeter fence and was very private. For this year’s anniversary dinner, I surprised Ariel with a sunset cruise at Tambobo Bay and dinner on board the resort yacht – The Annabel Lee. I was so happy to have pulled it off. The staff of Antulang was the best! They really made our stay very special. We were so sad to leave.

2009 – Swimming with the whale sharks was the higlight of this year’s anniversary. We took a bus to Legaspi in Albay (flight was full!) then toured around the city. The next day, we took a trek up Mt. Mayon, before heading to Donsol. On the day of our anniversary, we were rewarded with several whale shark encounters. We had dinner at Barracuda, a bar owned by a local. It was one of our best anniv dinners ever. Then the following day, we headed off to Ticao Island in Masbate, stopping by the white sand beaches of the islands we saw along the way.

2010 – This was the first time we weren’t able to leave the city on our anniversary. We just had dinner at Kimpura in Greenhills. It was still memorable even if we just stayed home for most of the day. We left a few days later for Coron and spent an amazing week touring the islands. We spent 3 nights in Majika Island, 2 nights in Coron town proper, and nights in Club Paradise.

2011 – This year, we are heading to Europe! We initially planned to go to UK and France. Our itinerary includes a week in London, a week in Scotland, and a week in France. However, today, while we were given the good news that our Schengen Visa application was approved, it was quickly followed by the disappointing news that we have to come back tomorrow to pick up our Visa. The volume of applications made it impossible to release the Visa as scheduled today. While we had a heavy heart at first, Ariel and I decided to just let it go since our flight has been booked and our London itinerary firmed up. Also, we had prayed about it and trusted that God will make a way for us if it is His will for us to go to Paris this year. So, we are changing our itinerary and sticking to UK. Instead of Paris, we will just spend a few more days touring London, and will also go to Ireland. We are so excited to go tomorrow and spend the rest of our anniversary week (plus some!) in the UK!

We are very thankful for God’s faithfulness in our lives. We are so blessed! Looking forward to more years of adventure. 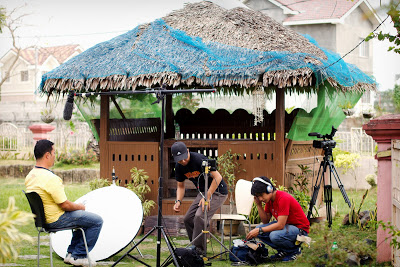