I have been looking forward to this workshop the moment I read about who Gunther Deichmann is. Yes, I must admit, I never heard of him until it was announced in our Photography Club meeting that we will have a workshop with him. When I got home that night, I immediately googled him and I found his website. I pored through his colorful and moving images for over an hour, stopping once in a while to share specific shots with my hubby. Needless to say, I became a fan overnight. I read about his biography and learned how his career began, and what he has accomplished in the past 30 years. I looked at his workshops and read through the testimonials. I dreamed of revisiting Cambodia to join his class and see the beautiful Angkor region with a different pair of eyes. I wondered what it will be like to discover India and Nepal under his tutelage. Over the next couple of weeks leading up to the workshop, I’d visit his website regularly and check if there are new posts on his blog, or new photos in his gallery. I added his website to my inspiration source list. I practically became a virtual stalker. As the day of the workshop draws near, I couldn’t contain my excitement. I thought it would be a preview of what it’s like to learn photography from him. Granted this is a one day workshop to be held in the heart of the metro, very different from his usual one-week sojourn in exotic places, I thought this will give me a glimpse of what he is like as a mentor. I already know he is an excellent photographer, but is he equally as good a teacher? I’ve read the testimonials, all of them good, but what if he just doesn’t publish bad feedback? I also heard from Luis Harder, one of his regular students and the person instrumental to this workshop, that he is so passionate about his craft and very generous to share everything that he knows. But I want to find out for myself.

Then the day finally arrived. We started exactly at 6:30pm, on October 8, with a few participants delayed by traffic. It was a short briefing but very informative and it got everyone excited for the big day. We were told to set our ISO to no higher than 200 for the shoot the next day. Our cameras should also be set to either Manual, Aperture Priority or Shutter Priority. No special lenses are required. We could work with whatever lens we have. Two participants will use a point and shoot – set in manual mode. One will use film SLR.

By 6am on October 9, Ariel and I entered the Fort Santiago parking area and met with GD and the rest of the participants. It was the start of a LONG and tiring day. Black caps were distributed to everyone courtesy of GD Workshops by PowerMac Center. We started walking towards Manila Cathedral. Our first task was to shoot the church without the electric wires. I thought it would be a challenge since wires from the electric posts are usually in a messy tangle around the metro. Every now and then, GD would gather us to give some pointers. Most of the time was devoted to finding THE shot. Then we walked to an area where colorful graffiti adorned what looked like ruins of an old structure. The walls are very colorful. However, the place was littered with trash and human poop, and it was not pleasant to the sense of smell. GD asked us how much time we thought we could spend shooting the area. This was a question he posted to us throughout the day, the point being that if we want to SEE the place, we need to take time to look at it. In fact, in the graffiti wall, we were asked to just stand there for 5 minutes and just look at the surroundings without taking a photo. After this, we walked to Fort Santiago and entered the premises. We were to spend two hours inside Fort Santiago. But only an hour later, I was already feeling very tired, hungry and dehydrated, and felt the onset of a migraine. We distributed drinks before entering Fort Santiago but it was not enough to combat the heat of the early morning sun, plus the exhaustion from walking around. At one point, I just had to sit on the pavement and rest. By 11am, we were back in Makati for lunch. After lunch, we started uploading our photos into the iMac units provided by Power Mac Center. We were asked to choose our 3 best shots for evaluation. We used Aperture (Apple’s photo management software) for post processing under the tutelage of GD and the 3 PowerMac personnel who were there to assist the group. I have been a Mac user for four years but my software of choice is Photoshop. It was a delight to work with Aperture and see my photos transform from drab to fab in just a few easy clicks.

At 2pm, we all went for a quick snack of pancit bihon before heading out to the American Cemetery for the afternoon shoot. After a while, it started raining. Most of us sought shelter and avoided taking photos in the rain. Other braver students just wrapped their cameras in plastic and kept on shooting. It was my first time in the American Cemetery and it was beautiful. Very quiet and calming, and very scenic. The challenge is coming up with a shot that is unique from everyone else’s. By 5pm, we headed back to the church for post processing and uploading. Baked macaroni wa served while everyone was hard at work. Then the wait began. GD was to pick the best photos and show it to the class for discussion. By around 8pm, GD came up front and started talking about the photos we took. First up, four “almost winners”. These were shots that were unique but somehow fell short in terms of the technical aspects of photography. Photos were shot by Ron Nicolas, Ian Reyes, Carlo Tabaloc and Julie Santos. In the end, Gunther awarded Power Mac workshop GCs to Carlo and Julie.

Then the runners up were called. Nikki Legaspi, Michael Angelo Lim, Karlo Alvarado and my friend and fellow scrapper, Lee Imao, were cited for their unique shots. They each got a Power Mac workshop GC.

In second place was my friend and fellow scrapper, Liza Bermudez. Two of her six photos were picked and she received a headphone from Power Mac.

Then, imagine my surprise and excitement when the top spot was given to my hubby, Ariel. Two of his photos were picked, too! The moment I saw his name, I started freaking out, which surprised him because he didn’t see his name right away. I was so proud. He got an iPod Dock/Speakers/Alarm Clock. It had been a very long day but it was a lot of fun. I learned a lot from GD. We didn’t talk about the usual boring technical aspects of photography that is best reserved for a classroom discussion. We went out and he gave us practical pointers. Perhaps one key learning for me is the importance of taking time to see the subject. I’ve read a similar tip in Scott Kelby’s book under the section on Travel Photography. Kelby recommended researching photos that were taken of the place you are visiting and look for unique shots. This is good when you have time to research or when you go to a place that has been well-photographed, like the Eiffel Tower. But what if you are going to a remote area that has not yet made it to the Google Search Engine? I like GD’s approach of sitting back and spending a few minutes, an hour, a day to study the place, see how light changes the surroundings, look for unusual angles, or reflections in water, etc. More often, when going to a new place, we get so excited to snap photos that we just charge and start shooting the first thing we see.

On our briefing night, he also explained the difference between jpeg and RAW format. While I am mostly aware of this, it was the first time I learned that a jpeg file deteriorates over time, as you open and save it. He illustrated this with a bucket of water and a sponge. At that moment, I was convinced he is not just a great photographer, but a great teacher as well.

I also like what he shared about having a preset shutter-aperture-ISO before going out, just in case he sees a good shot that requires an immediate reaction. In cases like that, you won’t have to stop to make sure you have the correct setting.

He also shared some advantages and disadvantages of shooting in Portrait vs. Landscape orientation, and why it is better to have your subject slightly to the left or to the right and not right smack in the middle.

Most of all, I like what he said about great photos not being a product of a good camera, but they are born out of good sight. It’s what we see that makes a good photo. 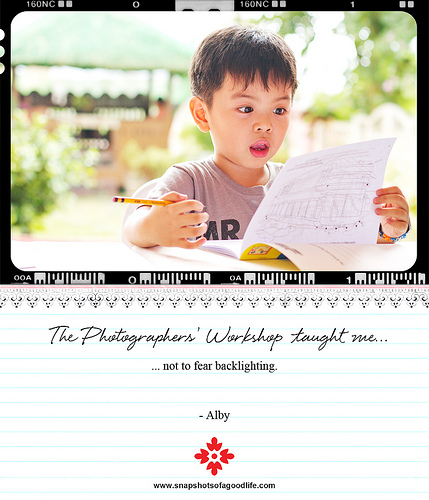 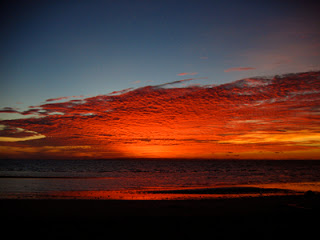