Our flight was originally scheduled at 7:10am but I got an email the day before that it will be moved to 8:50am, arrival at Busuanga Airport expected at 9:55am. We decided to leave early just the same, in case the schedule moves back to the original slot. So we found ourselves lugging two heavy bags and a light tote with our life vests for check in, plus hand-carried bags for each of us to the check in counter shortly before 7am. By 8:30, we still haven’t boarded. It was almost 9am when we were finally called to board a bus that took us to our plane. After that, we had to wait about 30 minutes before we could take off. Apparently, there was a long queue of flights out of Manila – the weekend rush. It was almost 9:30am when our plane finally took off. The flight was only about 30 minutes which made up a bit for the delay.

It’s been over 12 years since I was last in Coron. Back then, flights to the island were few and far between. The runway was a strip of dirt road. I took a 10-hour trip by sea going to the island with my parents, my aunt and uncle, plus a few other couple friends of my parents. We stayed with some relatives who lived in an island somewhere. I actually couldn’t remember where. On our trip back to Manila, we decided to travel by air, in an 8-seater plane. We were already seated when the pilot asked us to go down again as the engine wouldn’t start. He said we needed to wait a bit for the plane to cool off. We looked at each other and prayed hard. It was quite an adventure. But I digress.

Our plane touched down shortly after 10. We were met by a representative from Majika Island Resort who led us to a non-aircon van that took us to the town proper. It was a scenic but rough 45-minute ride. We met the Villafuerte family (the mom and dad, and 3 kids) for the first time. Like us, they also found Majika on the internet. It ranked 1st in Trip Advisor among the accommodations in Coron, and the reviews are 100% positive. The only downside I saw was the fact that the accommodations are not air-conditioned. We are really not very picky when it comes to accommodations. We’ve stayed in simple cottages before, but in this heat, I doubt if fans will be enough to cool the cottage. Anyway, we were first ushered into the 2nd floor of what looked like a private dwelling, in the heart of the town. There, we were served with brunch – rice, tinolang manok and squid omelette. Later I realized that our meal in town was a preview of sorts on what our meals would be like in Majika. Shortly after lunch, we walked towards the pier. It was just a few meters away from where we had lunch.

There, we boarded a boat that sailed us into Bintuan Island, where Majika Resort is located. It was an hour-long ride through the silky smooth ocean. As we approached the island, I was filled with uncertainty. It didn’t look remarkable from afar. In fact, it didn’t look like a resort at all! As we approached the island, I could barely make out the cottages as trees obscured the view. At the backdrop are barren hills covered in what looked like dried grass, and a handful of trees. There was a visible trail going up the hill but the dry cover make it look so uninviting. Finally, land. We disembarked on a floating hut and waded through knee-deep sea water. We made our way up to the main dining hall-reception area where welcome drinks were served. The iced tea was a welcome respite from the heat of the summer sun. We were then ushered into our cottage. It was surprisingly big, with two double beds, a table and a bench. Drinking water was provided in each room via a 5-gallon water dispenser. The bathroom was likewise spacious, fitted with modern bathroom amenities. Toilet paper was provided. I did not expect to see anything else as I was advised to bring our own towels and toiletries. I was surprised to see a big shower area. BUT half the space was occupied by three large water containers. Then we were hit by the awful truth.

There was no running water. In fairness to the resort, they have their own water pump. And the fact that there are modern bathroom fixtures told me they had running water. However, due to El Nino, the water supply has become scarce and can no longer fill their overhead tank. Fortunately, the resort has a well and the water has not dried up. So the bathrooms are filled with water from the well on a daily basis. And to think I even inquired if they have hot water available!

As we tried to settle down, another revelation hit us. The resort is powered by a generator so electricity is only available from 6pm to 6am every day. Hence, no fans to cool the cottage on our first afternoon in the island. Ariel and I were so tired from the trip and the lack of sleep the night before. We decided to take a nap before exploring the island. However, because of the heat, we could barely doze off. We kept on waking up soaked in sweat. After a while, we just gave up and decided to just hike up the hill.

The trail starts just behind our cottage, between number 7 (ours) and 8. The first few meters was a steep climb but the view was very rewarding. At this point, one can already stop and bask in the beauty of nature. A huge tree with two swings act as the first marker. From this vantage point, you can see the mangrove forest below. We took a few minutes to admire the beauty around us before proceeding uphill. Fortunately, it was a bit cloudy which made it easier for us. Otherwise, without trees to shelter us from the heat of the sun, it would have been a much more difficult climb, specially for someone as out of shape as I am. We took frequent stops to take photos and to catch our breath. We didn’t bring water so we weren’t properly hydrated. After a while, we reached a second marker. This time, there was only one swing as the tree is much smaller than the first marker. At this point, the sun came out from behind the clouds and the heat became almost unbearable. The last few meters to the peak was totally bare so I decided to stay put while Ariel proceeded to the peak. At the highest point of the hill, a lone bench welcomes the weary hiker. There are no more trees to tie a swing to and the bench serves as a perch as one drinks in the breathtaking view. After a while, I walked a few meters towards the peak to meet Ariel and then we started our downhill trek. Click here to see the video taken by Ariel showing the 360 degree view of the islands from the peak of the hill.

Back at the resort, we were relieved to find a jug of ice cold water to replenish our dehydrated bodies. Then, we were served banana fritters for snacks which Ariel and I washed down with a can of Coke.

At around 7pm, the bell rang to signify dinnertime. The food was ok and there was enough variety – soup, meat, seafoods and veggies – good, but forgettable. It satisfied our hunger but did not delight our palate.

We retired to our cottage early. It was better with the fans on, but still a bit toasty. We just watched Glee and Criminal Minds before before drifting to sleep. 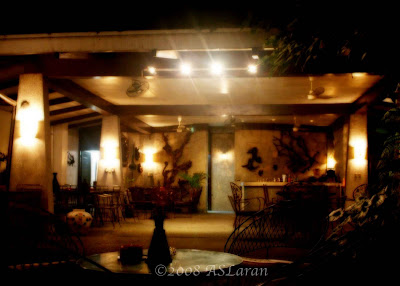