I instantly fell in love with Basic Grey’s Sugar Rush Line. I love the range of colors that are not too bright but still evoke a very happy and warm feeling. I think I am getting better at using BG products. I was able to complete the following projects in one sitting. Yay!

I have this photo of Ariel which I took using my lensbaby. I loved it and wanted to scrap it so badly. And then I have this paper, Cinnamon Bear, which I fell in love with and wanted to use the moment I saw it. Both are a bit busy so I had to find a way to make it work.
I decided to mat the photo with Jelly Beans paper (I used the back) to make it stand out against the busy background. I distressed the edges of the paper with chalk ink to define it against the busy backdrop. And because the base paper has such gorgeous colors that I want to show, I opted for a simple layout with a lot of white space. 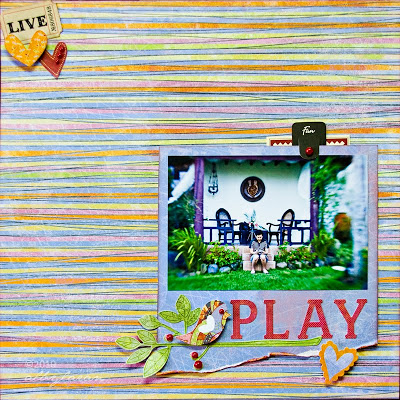 To avoid cluttering the page, I opted for hidden journaling which I inserted behind the photo. 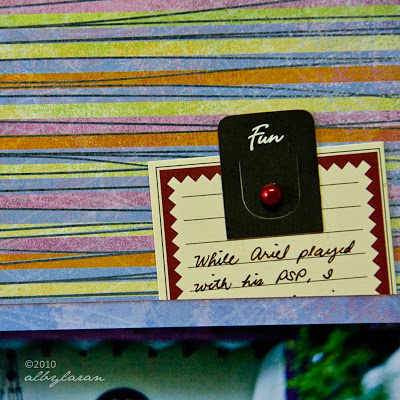 I used the matching Sticker Elements to embellish the page. I used the tree branch horizontally as a perch for the bird instead of vertically, which I thought was very clever. LOL! I used foam adhesive on the bird and some parts of the branch for dimension. The title was from the Mini Monograms of the same line. 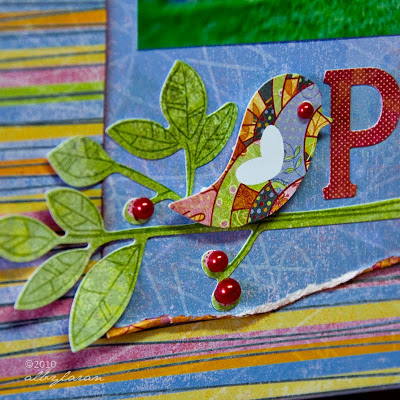 I added a few more elements on the upper left portion of the page to balance the grouping of elements on the lower right portion. Here, I used foam adhesive on one heart to add dimension. The red pearls add touch of elegance and texture. 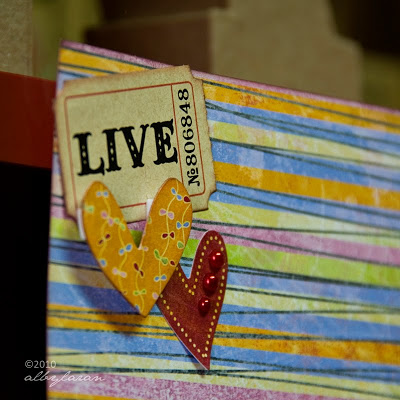 For this next layout, I used Candy Hearts as base. I thought it brings out the greens in the photo. I brought out my cardstock (Bazzil) stash and found one that I can use for this layout. I then cut out a strip from the Jelly Beans paper, and some patterns from Peanut Brittle paper. I arranged the cut out patterns on the cardstock, right side down, and sprayed the cardstock with Shimmerz – Bamboo Leaf. 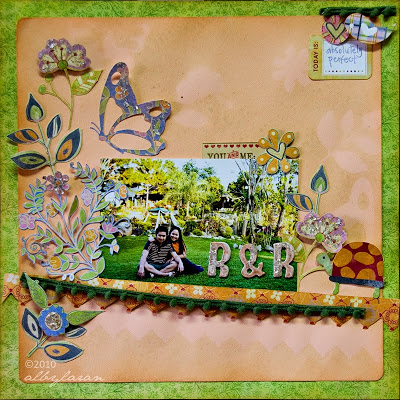 I also decided on a hidden journaling since the page is already very busy. I added a bit of Diamond Glaze on the heart at the center of the flower for a bit of dimension. It’s not that visible in the photo but it’s there. 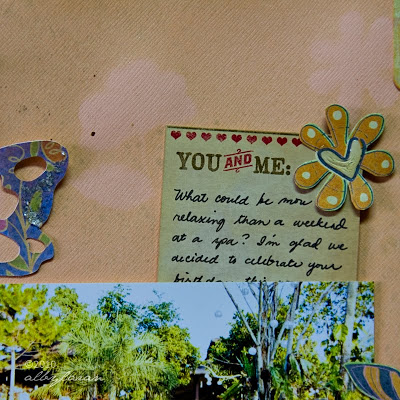 I also added Diamond Glaze on the circle with heart to make it look like an epoxy sticker (again, not that visible in this photo). The bird was adhered using foam tape. I thought the die cut sticker that says “today is: absolutely perfect” just captures how I felt at the time the photo was taken. 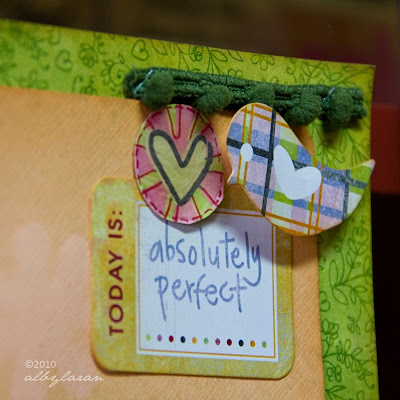 I also cut out a pattern from Bottle Caps paper. After starting on one pattern, I realized it’s too hard! It’s that plant at the lower left side of the photo. But since I’ve already started cutting, I decided to just finish one. So there it is! The butterfly was cut using Slice. 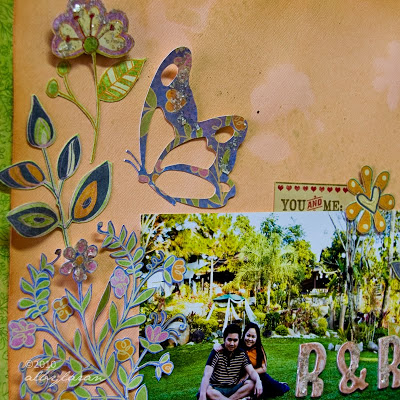 The sparkly stuff are mica flakes. My favorite element here is THE TURTLE! Isn’t it the cutest?
I used white Thickers for the title which I painted a bit with Antique Lace Shimmerz which I absolutely love (photo is horrible though), and topped with a bit of mica flakes. 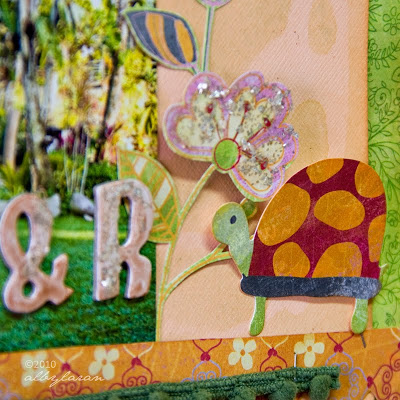 After the layouts, I decided to use the leftover scraps for cards. I made two 5×7 cards from the scraps. The paper here is Bottle Caps – I used both sides! I cut one piece which is slightly smaller than the base card, and another one that is even smaller. I just layered the papers on the card and embellished with Rub Ons and a stamped butterfly which I colored with a marker. I used red pearls to embellish the card. 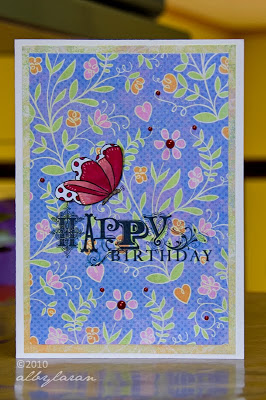 I used foam adhesive on the butterfly wings to add dimension. 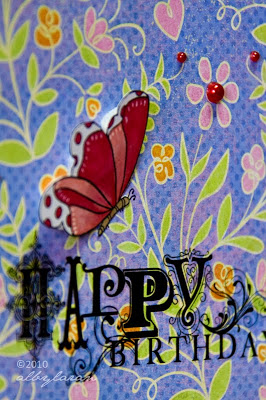 This one has the same basic design, using both sides of Peanut Brittle paper. I stamped the sentiment on a strip of paper and perched the owl on it. I used googly eyes (is that what they are called?) on the stamped image to make it more fun. I gave this card to a colleague who recently lost her sister in a tragic fire and my note was a bit serious so the cute and fun owl sort of lightens the mood of the card. 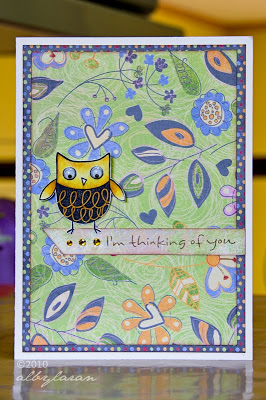 I also adhered the owl using foam adhesive to make it three-dimensional. 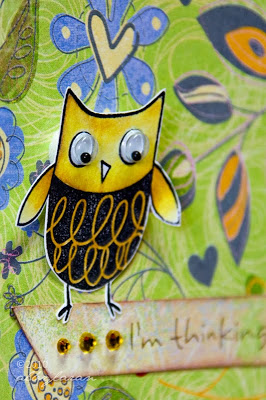 I really enjoyed making the layouts and cards! I was so inspired by the papers and I found it easy to use them on my projects.


Basic Grey Sugar Rush line and Shimmerz are now available at My Little Attic. I was told only a few items are left so better hurry and get some before they are gone. 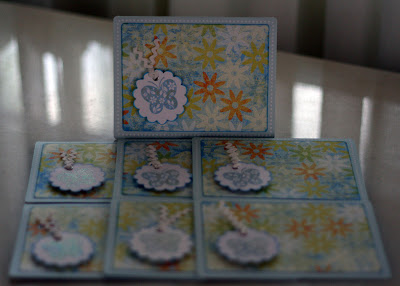 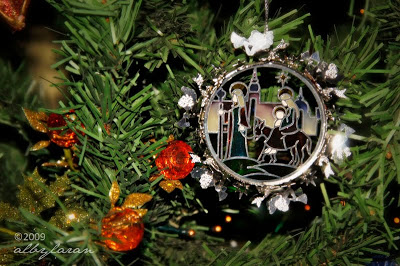 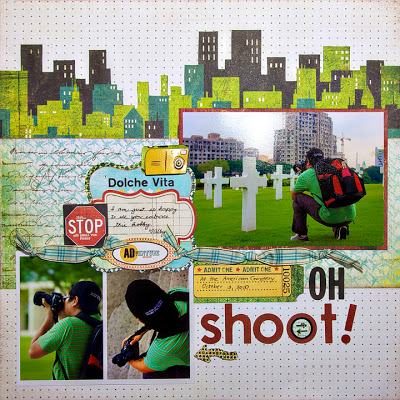