My birthday was actually almost two months ago but it took me a bit of time resizing the photos so well, I’m just posting this now.

Anyway, my hubby gifted me with an external flash for my Canon 40D DSLR. Knowing him though, I know he has a few more surprises up his sleeves. So, while I wasn’t all that surprised to get flowers from him, I was surprised to see it waiting outside our bedroom door when I woke up the morning of my birthday. Turned out he arranged for an early morning delivery.

The bouquet contains three each of some of my favorite flowers – three red Roses, three pink Carnations, three Gerberas (in assorted colors) three Lilies, and a lot of beautiful fillers. I just love getting flowers! And he knows it!

We had lunch at Abe right after our Blow Up Babies appointment. I blogged about that here. Anyway, it had been very difficult to reserve tables at Abe but we were able to book one for my birthday. Yahoo!

We ordered Binukadkad na plapla which I first discovered at Bistro Remedios. Now, this dish is actually available in many other restaurants (like Recipes) but it’s only here where it is paired with Burong Dalag which I thought is the best way to eat this dish.

A meal won’t be complete without veggies so we ordered Pinakbet. It was ok, nothing really spectacular – just your average pinakbet.

Now, I had been looking forward to ordering the Sinuteng Baby Squid. Unfortunately, it was unavailable so we ordered Sisig instead. No luck. It was also unavailable! Sigh. We settled with the Crispy Shrimps which was good but I had my heart set on the baby squid.

After lunch, we stopped by the Home Depot nearby to get some kitchen stuff for my newly renovated kitchen. Then we headed to the Manila Ocean Park. I’ve got to tell you this. I’ve been planning to go to MOP for a long time and I thought I’d surprise Ariel on my birthday. So I told him that I have an itinerary and that he should leave it up to me. Days before my birthday, Ariel told me that whatever my plans are, I should give him 3 hours because he has a surprise for me. I had a very strong feeling about it so I asked him if he’s taking me to MOP. True enough, our surprise for each other is a visit to MOP.

Our plans ended with MOP. After that, it was totally spontaneous. Ariel asked me if I want to go to Fort Santiago. It’s been over two decades since I was last there so I readily agreed. It was a bit unkempt. I think we are doing a poor job maintaining our historical sites. Tsk. Tsk. Nonetheless, it’s still beautiful and very photo-worthy.

After our tour of Fort Santiago, I asked Ariel to take care of choosing our dinner destination. He brought me to Ilustrado which I really liked because that only means we’re having Paella for dinner. It was our first time to eat there and we had a wonderful time.
Ariel ordered red wine while I opted for white. We skipped appetizer because we need the tummy space for the heavy paella dish.

Ariel also got a fish dish with lots of garlic. Yummy!!!

For dessert, we ordered Canonigo which is a popular Spanish dessert. It’s like the outside of Brazo De Mercedes which is light and fluffy, topped with vanilla and caramel sauce , and mango balls. The sauce is too sweet for my taste but it was a great end to our mouthwatering dinner.

Tired from a packed day, we just went home after dinner instead of going to the spa which we initially planned. We opted for a home massage so we can go to sleep immediately after. Before I went to bed, hubby presented his final surprise – a white leather-strapped wristwatch which I saw at a jewelry store months ago.

Can’t wait for my birthday next year! 😀 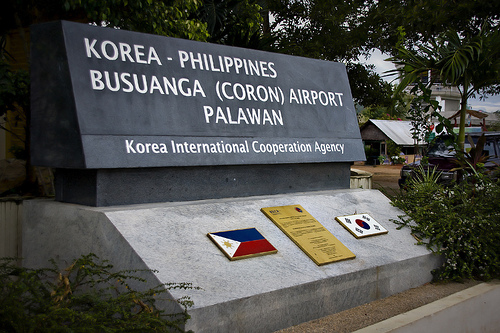