Our adventure this summer started at 2am on April 14th, 2007. After only an hour of sleep (we finished packing at 1am, having worked late to finish up before our weeklong break), it was time to wake up and get ready for our 5am flight. We arrived at the Manila Domestic airport at 3am, exactly 2 hours before our scheduled departure (masunurin kami!). Our flight was mostly uneventful. I slipped in and out of consciousness during the flight and before I knew it, a beautiful sunrise welcomed us into the island of Mactan in Cabu.

By 6:15, we were already heading to the exit of the Mactan International airport, backpacks in tow. Waiting for us was our hired cab driver Alex. He was referred to us by our contact at Marlin Beach Resort and we arranged to meet at the airport so he could drive us to Hagnaya Port in San Remigio, Cebu. He charged us P1,800 for the two hour drive to the port that will take us to the island of Sta. Fe, also known Bantayan Island (call him at 0918-7953882). 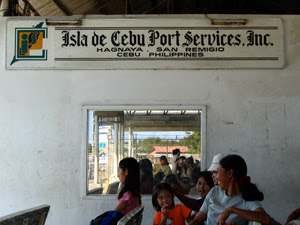 Hagnaya Port – Can you see me?

Alex drove like a maniac and got us at the port in two hours. It cost us P1,800 (instead of a few hundred bucks if we took the bus), but it saved us another hour or so of land trip. It was also much more comfortable, having just Ariel and myself at the back seat, the aircon full blast, and soft music playing throughout the trip. Alex kept the car clean inside and out, the red seat cover was spotless, the exterior was gleaming white. Though we were half asleep for most of the two hours, I noticed that the roads were in excellent condition and the route was picturesque – at least the parts I saw in my groggy state. We passed by hilly winding roads similar to Baguio and some farm lands. It was a pretty sight but we were so sleepy to enjoy most of it. 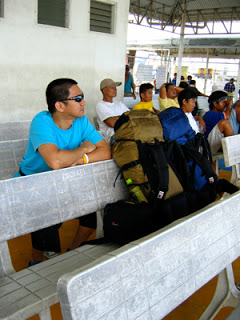 Just before we entered the port area, Alex warned us that porters will most likely swarm us like a pack of hungry lions. He told us not to be afraid and that they will just offer to help carry our bags. He advised us that P50 will be enough for one person to carry our two backpacks. We decided to get help so Ariel can line up to get our tickets. My bladdder was about to explode so I ran to the ladies room. I paid P1.00 to use the rest room. It was sparkling clean but I almost threw up from the foul smell. It wasn’t your usual bathroom smell. It was something else – quite familiar but at that time, I couldn’t put my finger on it. It was much later when I realized that the smell was a very strong fishy smell coming from the big plastic water storage. (After days of staying at the island, I noticed that the tap water is salty and when some stored water is left overnight, it becomes smelly in the morning. Imagine a big Orocan filled with week-old water!). Note: make sure to use the rest room in the gas stations along the way. There was one about a kilometer from the port. 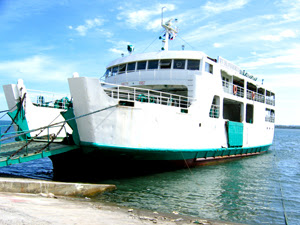 It was only 8:15 and the fast craft was scheduled to leave at 8:30 but the tickets were already sold out. We had a choice to wait for the next fast craft which leaves at 11:30am and will reach Sta. Fe at 12:00 or take the RORO which leaves at 9:30 and will reach Sta. Fe at 10:30. The choice was pretty obvious. We wanted to be at the beach as early as possible. We got two first class tickets to Sta. Fe which bought us seats in an enclosed area with air-conditioning, a and soft cushioned seats, albeit rather worn out. I’d recommend first class tickets if like us, you would sleep for most of the trip. However, if you are not as exhausted as we are, better take the open air seats so you can feel the wind against your face, have an unobstructed view of the islands, and get a breath of fresh air amid the engine noise and the chatter of other passengers. Our more quiet space afforded us a few minutes nap though there was a group of young and rowdy Koreans (They’re everywhere!!! And they manage to find the most remote beaches of our country!) breaking the silence every now and then. 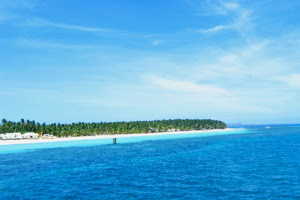 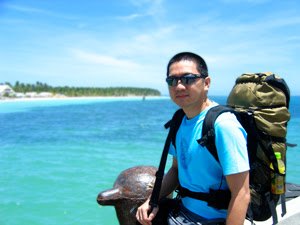 That’s my man! Just got off the ferry

In an hour’s time, a beautiful sight welcomed us – the glittery white sand of Sta. Fe! We were met by the van and driver of Marlin Beach Resort which was to be our home for the next few days. It was only a few minutes away from the port so we were in the resort reception area in no time. Checking in was fairly quick and we were soon ushered into our De Luxe room (P2,400 per night). Our room was huge but very simply and sparsely furnished. There was a queen-sized bed, a dresser table with mirror, cable TV on a small rack, small tables on each side of the bed, and a built in closet. With the size of the room, a couch, some chairs and a coffee table can still comfortably fit in. The toilet and bath was spotless but very small. There was a glass and aluminum shower enclosure and basic toiletries were provided. There were two clean but worn out bath towels, a small sachet of shampoo (competitive brand! – hubby works for Unilever.), and two small bars of bath soap. Good thing we brought our own toiletries – a whole load of them.

Since it was nearly lunch time, and we didn’t have a chance to eat a decent breakfast, Ariel and I were famished. We decided to unpack later and grab some lunch first. We ate at the resort restaurant and ordered a plate of Bam-I noodles (we always order this whenever available), calamares (another favorite), pork barbecue and mango shake. The food was quite good, the serving size generous. We devoured the food in minutes and before the hour was up, we were already on the bed catching up on some zzzs (I know it’s bad, but we were sleepy!).

Local kids playing by the beach
We were up by 3pm but we were not in the mood for a swim. We just took a stroll by the beach. It was gorgeous. After Boracay, I never thought I’d see another beach just as beautiful. Bantayan Island exceeded my expectations. The sand is just as white, just as powdery. In addition, it is not lined with commercial establishments and there were hardly any people. The crystal clear water was calm, warm, glittery under the afternoon sun, and very inviting. We were mesmerized by the beauty of the island. While admiring the beach, a few locals approached us. Mario offered us a trip to the Virgin Island the following day for only P800, almost half the price of what the resort is offering (P1,500). We decided to go for it. After all, who would say no to a great deal? 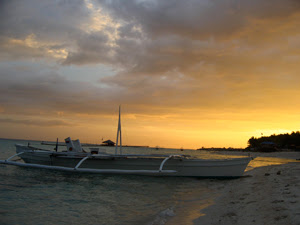 When it became too dark to walk by the beach, we went out to the main road and explored the community. We chanced upon a small barbecue stand selling an assortment of grilled meat – chicken, pork, chicken gizzard, hotdog and Cebu chorizo. I wanted Ariel to taste the Cebu chorizo since I fell in love with it the first time I tried it in Cebu City. We bought one stick of grilled chorizo for P15.00. It was good, though not as good as the one I tried in Cebu City. We walked further, looking for a place to have a decent dinner. As we walked around, we noticed how clean the surroundings are. Not a piece of trash in sight. The poblacion is a quiet neighborhood. There are a number of restaurants, sari-sari stores and mini-grocery stores. We passed by a police station but didn’t notice any men in uniform. We checked out the restaurants in the area and decided on Marisqueira O’ Portugese Bar and Restaurant (can never remember that name – had to look at my notes!). We were told that they serve great seafood paella so we ordered that along with a platter of buttered chicken. They were right, the paella was good. Only, it was not the same as the paella you would normally see in Spanish restaurants. For one, it was yellow. It also tasted different, but it was very good nonetheless. The chicken was great, too! Though I couldn’t figure out why it was called buttered chicken. Maybe more like battered. Anyway, it was a great dinner and we had plenty of leftovers because of the big serving (most of the restaurants in Bantayan offer huge servings and are not ideal for couples). Mario came to us while we were dining, offering to go to the public market to buy seafood so we can have lunch at the Virgin Beach the following day. He said he’ll take care of cooking the food. We gave him P500 and agreed to meet at the beachfront of Kota Beach Resort by 8:00 am. 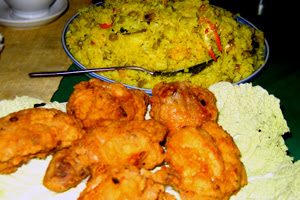 We walked back to the resort. The street was very dark, no street lights, no standing light in the houses. The only source of light are those coming from the still open restaurants. People obviously retire early as there were very few people in the streets. We decided to go to bed early as well. We have a big day tomorrow.

The Road to Gumaca, Quezon