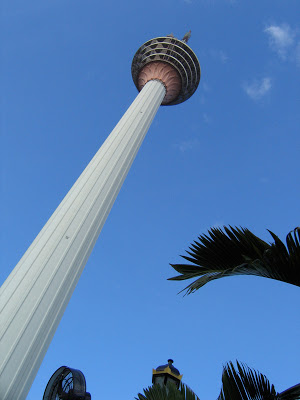 After 9 years, I was going to see Kuala Lumpur again. In 1998, I went to KL, also via Singapore, to attend a Qualitative Research workshop by Burke Institute. I stayed at the New World Renaissance Hotel which is right across the Petronas twin towers. I remember getting off the plane and seeing the newly constructed, very modern, international airport. I didn’t know exactly where to go but figured I had to get into the train to get to the arrival hall. I just went with the crowd and found myself in the other terminal where the immigration hall and the luggage claim areas are. I traveled alone that time and was not able to get around much. I was hoping I’ll see more of KL this time. 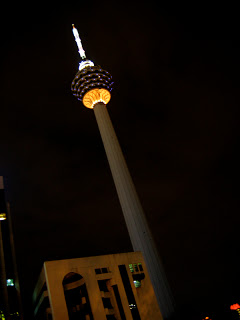 Fast forward to 2007, I was privileged to be sent to the Asia Pacific ESOMAR conference to be held in Kuala Lumpur, Malaysia. I was at the Ninoy Aquino International Airport by 5:15 am, a good three hours before my plane was to take off for Singapore. At this time, the airport wasn’t so crowded yet so checking in had been a breeze. I whispered a silent prayer asking God to bless me with a “good” seatmate – someone who would let me read my book or watch a movie in peace and not engage me in a conversation. God granted my request and I was seated beside a gentleman who didn’t bother me with unwanted conversation and frequent trips to the lavatory (I got the aisle seat). 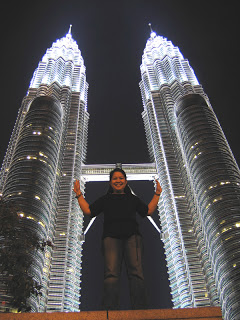 As soon as the doors where opened, I had to rush out and find my departure gate for Malaysia. I decided to check out the stores on my return flight when I have more time. There was already a long line going into the waiting area for my KL flight. I again whispered a silent prayer that I may be blessed with a quiet seatmate. We boarded after just a few minutes and I thanked God for yet another peaceful flight. As I got out of the plane, I was greeted by a familiar sight – the modern structure of the Kuala Lumpur International Airport. 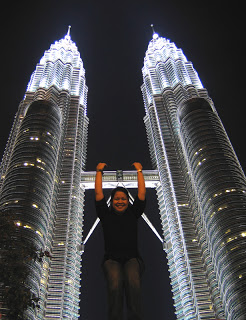 It was already past 2pm when I got into the cab that will take me to the Shangri La Hotel. It was an hour-long drive to the city but I didn’t mind since the route was scenic with dense rows of trees and plants along the highway. The roads were in excellent condition and there was hardly any traffic along the way. I felt a bit sad for my country. In the Philippines, the first sights a tourist would encounter are the old and worn out airport and the bad traffic within the airport vicinity and probably even worse as they get to EDSA. Not a very good first impression. 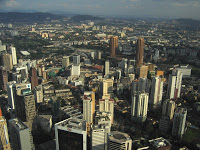 It was past 3pm when I finally got into my room at the Shangri-La Hotel in Kuala Lumpur. As I always do when I am staying in a hotel, I checked the bathroom first. It was big enough to my liking, has a marbled flooring, with a separate tub and shower. The shower is enclosed in glass and there is a water temperature control knob (Our bathroom at home was actually inspired by a hotel bathroom like this, with a separate tub and shower, though ours has a Jacuzzi instead of the usual tub). The tub is the usual rectangular, all-white ensemble, with a separate faucet and hand-held shower fixtures. As with any five star hotel, the usual bathroom amenities are provided. The shampoo, hair conditioner and body lotion come in lavender scent. There’s a toothbrush, toothpaste, emery board, cotton buds and shower cap. The bath robes are too big for me, but the towels are just the right size – big enough to wrap around my entire body. Next I checked the closet and was delighted to find a personal safe, an ironing board and a flat iron – perfect if my clothes got too wrinkled in the luggage. There were enough hangers for all my clothes, and the personal safe is big enough to put my laptop in. The king-sized bed in all-white linen, soft duvet, and gold bed cover is very comfortable, and smelled of fabric softener. The four pillows are very fluffy and are of the perfect size. As I look at the gigantic bed, I am reminded of the four nights I will spend sleeping here alone, occupying probably just a third of the space, dreaming I am sleeping instead in our slightly smaller queen-sized bed, in the warm embrace of my hubby. 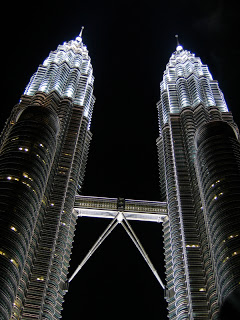 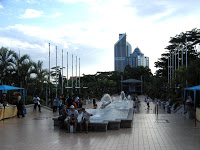 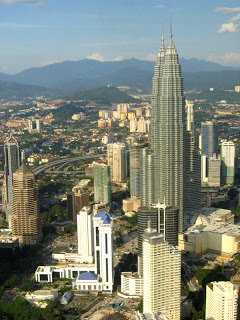 I heard my tummy grumble in protest and I was quickly reminded to check the room service menu. I settled with something familiar – a plate of pasta. As I was waiting for my late lunch, I quickly unpacked and contemplated if I should venture out on my own. I was still undecided when my “lunch” arrived and I quickly devoured half the plate. Once satisfied with my meal, I looked out the window and saw the clear skies and the beautiful sunny weather. That’s when I decided to check out the KL Tower and take pictures of the city from the view deck of the 4th tallest tower in the world. While the KL Tower is only a few blocks away from the hotel, I was advised to take a cab as it might be dangerous for me to walk uphill alone. I alighted the cab after just a few minutes of driving. I paid the entrance fee of RM 20 (about P300) and soon found myself in the midst of a bustling weekend tourist crowd. The sunny weather provided the right level of light to capture the vivid city landscape through my Canon Powershot camera. I had an unobstructed view of the Petronas towers and took a few shots from my vantage point. Satisfied with my city shots, I decided to go down to take a picture of the tower from below. I stayed for a total of about 30 minutes before heading back to the hotel.

With nothing else planned for the night, I decided to try the traditional Malay massage. Instead of having it at the spa, I asked for the room service. Soon, I was in massage heaven and my skin was slathered in lavender scented oil. As I was enjoying my massage, I couldn’t help but think of my hubby back in Manila. He also loves massages and every Sunday night, the two of us would indulge in an hour-long Swedish massage. Tonight, we didn’t share that experience. Instead, I was alone in a hotel room thousands of miles away. Sigh. 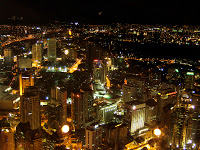 By Tuesday, I still had not ventured out on my own. It had been two room service dinners for me. I was able to “reconnect” with old ACNielsen colleagues and meet other people as well. Myls is a Filipina, connected with Good Thinking, Inc., a Manila-based research agency. I met a couple of others from around Asia Pacific – CC of HBO in Singapore, Sheila of Forward MRS in Australia, Athena of Buena Vista International in Hong Kong, to name a few. 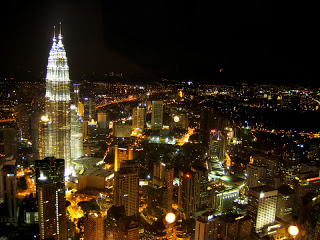 I decided to go with them and join the ESOMAR delegation for a dinner at the Menara Kuala Lumpur. That’s again the KL Tower. Yup, I’d been there, but I didn’t want to pass up the chance to take city shots at night. And that’s exactly what I did – had dinner and took night shots. Shortly after dinner, I left with some of the girls as we were already very tired from the day’s activities. 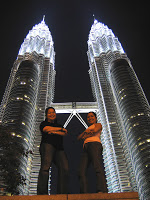 On Wednesday night, I joined Myls and a Malaysia-based friend of hers, Ato, for dinner at the Kuala Lumpur Convention Center. This is at the Petronas Towers. I figured it would be a good opportunity to do a bit of shopping and to take a few night shots of the twin towers. We decided to eat at Chili’s. Finally, a familiar taste after days of Malaysian cuisine. We ordered lots of food. I went for my usual fare – Mushroom Jack Fajitas. We also ordered the side sampler consisting of the egg rolls, chicken crispers and the chicken wings. Ato liked the nachos with beef and cheese while Myls craved for the cheese steak sandwich. We shared everything and we were full before we even touched the sandwich. By the way, Ato footed the bill. I was so embarrassed. I just tugged along and he ended paying for dinner for three instead of just dinner for two. Thank you very much Ato!!! After dinner, at around 11pm, we went out to take pictures of the Petronas Towers. Check out my cool shots!!! 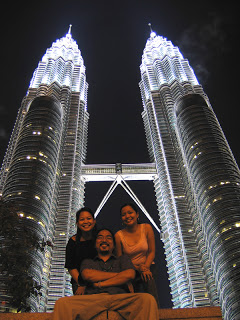 After four nights, I was excited to go back home. I was sharing a cab with CC (a delegate from Buenavista International based in Singapore) to the airport, but before that, we took a quick trip to the KLCC. I decided to buy the small gadget for cleaning contact lenses. I got it for MR99.9 which is roughly Php1,300. Basically, it has a small canister for the contact lenses.The canister is filled with the all-purpose fluid, attached to the battery powered base and then turned on for a 3 minute agitation to cleanse the lenses. After 3 minutes, the contact lenses are ready for use. A small suction tool is used to lift the lens so you can put it on without ever touching it. Pretty cool!!! The canister and suction tool need to be replaced quarterly for hygiene purposes. I bought a year’s worth of supplies. Hopefully by next year, it will be available in the Philippines.

At the Changi Aiport, I had an hour to shop before heading to the boarding gate for my flight to the Philippines. I was able to buy a few chocolate bars and a perfume for my hubby. He loves perfumes and likes new scents each time. He doesn’t buy scents he already tried in the past. Fortunately, new scents are introduced periodically. 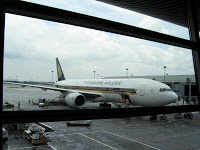 This time, I got him the Chanel Allure Homme Sport. I was pretty pleased that I was able to get him something which I knew he would love. I also bought a hard cover book by Mitch Albom – “for one more Day”. I was trying to look for “the five people you meet in heaven” which had been out of stock in the Philippines but also didn’t find it in the bookstores at the Changi Airport. I was beaming with excitement as I boarded the flight back home. I hardly shopped in KL but managed to get a few items in Singapore. By 9pm on Thursday night, I was back in the arms of my hubby. There’s no place like home!!! 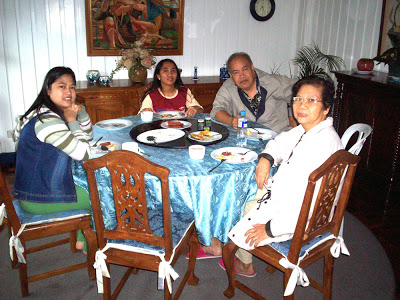 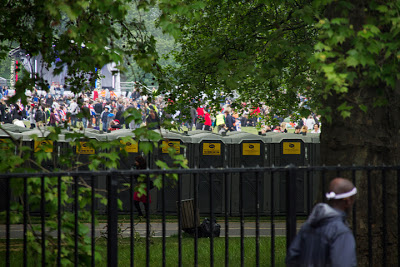